IN THE YEAR OF Erica McTier’s darkness, there were no sounds of summer, no turning of leaves in crisp autumn air.

The long, dark nights of her winter were upon her.

That day, calm and quiet, the cold wind of an early spring fresh upon their young pale cheeks—red now—and they smiled. From the northeast, a sudden storm. Cool, calm waters became raging, unnavigable waves that took their twenty-six foot sailboat and thrashed it unmercifully against an unapproachable shoreline of rocks and trees.

She told her friends and family, “I’ll let you know if I need you.”

She locked the doors, shut the windows, drew the curtains closed, and never left the house again.

Every Saturday morning she retrieved her grocery and liquor store deliveries from the porch, occasionally looking up and seeing her neighbors: walking by her house, standing and talking on street corners, looking away and whispering. She would slam the door, of course, on their vicious rumors and lies: she’d become an alcoholic, addicted to painkillers, she never bathed or cleaned the house.

She spent the morning of the one year anniversary of their deaths in bed, restless, drinking cups of coffee while looking at magazines and books. She stared for a while at the closed curtains then took her pills again. When she woke, she drank several glasses of red wine and paced the empty house.

She stopped and stood outside the children’s bedroom door. Her fingers, her hand, her body pressed to the hard paneled wood, and she closed her eyes. The sound of their voices, their smell, their touch—still there.

Crumpled onto the hallway floorboards, her head against the door, she cried tears she no longer thought she had.

She walked to her room and sat on the unmade bed. “Today, I can do it. I can.” But, of course, she didn’t. She curled up on the bed and slept again.

She woke and looked for something to wear, settling on a pair of jeans and a heavy hand-knit sweater. She dropped her robe to the ground and looked in the full length mirror, just staring at her thin, naked reflection.

Dressed, she poured another glass of wine and walked down the stairs. She laced her walking boots and put on her husband’s old tan canvas coat that sadly no longer smelled of him. Finishing her wine, she placed the empty glass on the narrow hallway table, opened the door, and stepped outside.

The dampness in the air is cold and fresh, and she walks alone along the quiet empty streets lined with old houses tucked away behind old trees.

At the top of a hill above a harbor, she stops and looks over the sea and the small rolling whitecaps picking up with a wind blowing in from the northeast.

She walks onto a long concrete pier where waves break over large rocks that line it. Her eyes stay fixed upon the open water and she does not notice the light rain beginning to fall.

Reaching the end of the pier, she stops next to an old lighthouse, the red and white paint faded and flaked from too many years of neglect and stormy weather. A tower where past worlds were once observed, their stories remaining mostly untold.

A wave crashes over the rocks, soaking her boots and the bottom of her pants. The wind picks up and the rain comes harder. A larger wave erupts and rains down upon her. She stays, unmoving and unconcerned, with each new wave that washes over her.

Lightning strikes, thunder, another large wave approaches. She steps to the edge, waiting, watching, now—the hand of a woman placed firmly on her shoulder pulls her back. The wave explodes.

“We need to get you off this pier!”

Erica looks at the woman standing beneath a black umbrella that ripples and furls in the gusting wind. The rain slashes sideways.

The woman tries the door.

Erica looks at the woman, at the open lighthouse door, at the hand extended toward her.

Together, the women climb the circular metal stairway that leads to an octagonal second-floor room, divided by a partition wall with an open door. Erica, cold and wet, looks over the room with its long desk running beneath a wall of dirty, smoke-stained windows facing the sea. Books and maps and nautical instruments everywhere, covered in dust and seemingly unmoved in a very long time. 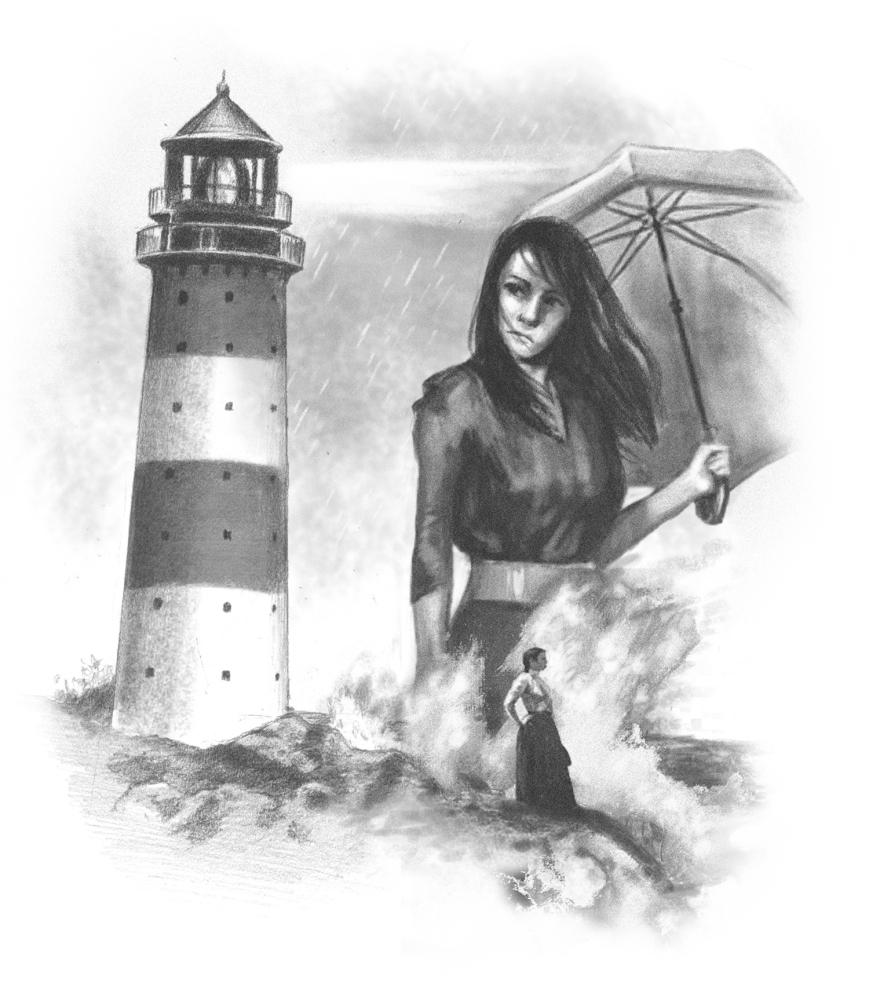 The other room is small; there are no windows. A black, iron-framed bed is made up with a grey wool blanket and a pillow. Next to it is a small wooden table with a lamp shaped like an anchor. Erica enters the room and sees the woman walking through an open door at the foot of the bed. She hears the woman calling out, she found some towels.

“We need to get that coat off.” The woman places several folded white towels on the bed. “Let me help you.” She hangs Erica’s wet, heavy coat on a hook on the back of the bathroom door, then pulls back the blanket and white sheet beneath it. “Get those wet things off, and I’ll have a look around.”

Erica watches the woman leave, only now beginning to process what has happened. She strips her wet jeans and sweater off and gets into the bed, pulling the sheet to her chest. She reaches for a towel and dries her hair, listening to the sounds of drawers and cupboards being opened and closed.

“This’ll help.” The woman places a partially full bottle of scotch and two mugs on the bedside table. She tries the anchor lamp, it won’t turn on.

The woman hangs her long, cashmere coat on the door. She looks close to Erica’s age, perhaps a little older. She’s tall and thin, slightly tanned, wearing a white silk blouse, a tight, just past-the-knees black skirt, and high, black leather boots. She has long, fine, golden brown hair. She sits on the bed and pours a small amount of scotch into each of the mugs. She hands one to Erica.

The woman watches Erica responding poorly to the taste. “Just sip it. It’ll help warm you.”

“My husband was the scotch drinker.”

Erica looks away and takes another long, slow sip.

“Do you mind?” The woman stretches out on the bed next to Erica.

Erica looks at the woman. “Can I ask you a question?”

“What were you doing on the pier, in this kind of weather?”

The woman pours another scotch. “You?”

Erica finishes hers and holds out her mug.

The woman pours and places the bottle back on the table. “This is such a pretty little town. I am absolutely in love with it.”

Erica looks again at the woman’s smooth, slightly tanned skin, her long, fine hair, her oval-shaped green eyes. “I must look a mess.” She tries to straighten and flatten her towel-dried hair.

Erica takes another drink and she’s starting to feel warm and a little lightheaded.

“Were you born here?”

“Yes, we both were.” Erica points with her mug at the woman’s hand. “You’re not married?”

“My husband.” Erica starts to take another sip and stops. She leans her head against the wall, holding her mug out towards the woman.

“No, thank you.” She’s feeling too lightheaded, overheated and somewhat claustrophobic. She begins to flap the sheet up and down in front of her. She looks at the woman. “Are you warm? I’m suddenly so warm.” She lets the sheet fall to her chest and holds it there. She closes her eyes and exhales.

Neither one speaks, and in the small room that feels warmer now from the heat of their bodies, they listen to the sounds of the wind and rain, the sea beneath them crashing over the rocks that line the pier.

“My husband and two children are gone. Actually, they’re not gone. That sounds so much like they just left, doesn’t it? Like they wanted to leave. But they didn’t. They died.”

Erica shifts onto her side, her face next to the smooth, scented skin of the woman’s neck and shoulder. She closes her eyes she listens again to the sounds of the wind and rain, the waves crashing over the rocks. “My daughter’s name was Haile. She was ten. She was so beautiful and precious. Her hair was gorgeous.” She opens her eyes where tears have gathered and looks at the woman. “Like yours. The same color. She was perfect, in every way. Like an angel.” Her tears fall and she brushes them away. “She was caring and helpful and she loved life. She did. She loved every minute.” Her tears come again and she pauses. “Ryan was eight.” She smiles. “He was beautiful too, of course. A little wild, but inquisitive and so cute. He’d go hard all day then just collapse. Sometimes on my lap. He was special. He was my little warrior, and he always will be.”

“Colin? He wasn’t perfect, but he was close.”

“They went for a sail and a storm came up, like this one, only worse. They didn’t make it back.”

“I should have been there. I grew up sailing, with my dad.” She pauses. “I was tired …”

The woman brushes away a stray strand of hair from Erica’s face.

“It happened a year ago, today.” Erica wipes the last of her tears from here eyes. “And as sad as this may sound, today is the first day since then that I’ve left the house. And we both know why, don’t we?”

Neither one speaks, the sounds of the storm washing over them.

“Why you were on the pier?”

She runs her hand softly over Erica’s head, down her hair. Again. Slowly. Stroking gently, the sounds of the wind and rain and waves all beginning to fall away, and the last thing Erica remembers before she sleeps is the touch of the woman’s hand upon her head, the sound of her heart beating, the soft scent and warmth of her skin.

Enjoyed this excerpt? Read more now, or go buy the book, or make a donation!

CHRISTIAN FENNELL is currently working on two books: a collection of short stories, On My Way to Sunday, and a novel, Urram Hill. A number of his short stories have appeared in literary journals, including Tincture and Indigo Rising UK. When not writing fiction, Christian is a regular contributor to The Prague Revue. He resides in rural Ontario.

One thought on “Angel of the Equinox”