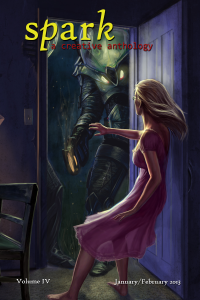 THE BELL RANG as the door opened. The Maestro didn’t need it; as customers approached he could hear their music. Still, people liked having their entrance announced.

“One moment, Cora,” he called out from his workshop as he secured the last key onto the flute. He held the instrument at eye level and flicked at the key several times to ensure a proper fit. The final test was in the playing, of course. He set his fingers on the keys and lifted the silver metal to his mouth, blowing across the embouchure hole, tapping at the key. Satisfied with his repair, he glided into Cora’s song, one of first flowers after heavy rains, of hope among ruins.

“That’s lovely, Maestro. I never tire of hearing it.”

He laid the flute on his workbench and started for the front of the store. “Correction, dear lady: You never tire of playing it. It is your song, after all.” He stopped at the counter and saw the young man standing next to her. “Well, who do we have here?” Focusing on the new face, he listened for new music. He heard Cora’s song, strong but gentle. Under that, the transient notes of passersby outside, but nothing from the boy.

“Maestro, this is my nephew, David. I don’t know if you heard about my sister and her husband, but—”

He shook David’s hand, but addressed Cora. “Yes, yes. Terrible business, that. I meant to pass and offer my condolences, but you and Andrew had already left. I’m so sorry.”

“That’s quite all right. And thank you. So, David will be living with us now. Problem is, most everything was lost in the fire, including his violin, so I was wondering if—”

“Well, we don’t have the money right now. My sister didn’t leave much, and he’ll need new clothes, but perhaps he could borrow one to practice here. I’m sure he could help around the shop, do some cleaning or run errands for you.”

“I suppose that could work.” He smiled and leaned over the counter, his face close to David’s. “Does that sound like a plan, lad?”

“‘Maestro.’ Everybody calls me ‘Maestro’ here. So, you play violin? Classical, or are you a fiddler?”

The Maestro turned to Cora, put a hand on her shoulder. “Can he stay now? I don’t have any lessons or urgent repairs. I can show him ’round, set him up with a violin, see what he’s got. Can he get home all right?”

She checked her watch. “That’s very kind of you, Maestro. I can come back for him. Two hours sound good?”

She gave David a peck on the cheek and a warning to behave himself before leaving, the bell unnecessarily announcing her departure. Her music left with her, and a dim discordant symphony of passing pedestrians was all that was left. Still no music came from David, and the Maestro knew it never would.

“So, my boy, these songs you can play,” the Maestro said, raising his eyebrows. “‘Twinkle, Twinkle’? ‘Frère Jacques’? Something like that?”

With a quizzical look, David said, “Yeah. Those. And ‘Amazing Grace.’”

“Don’t be too surprised; that’s standard fare, although ‘Amazing Grace’ is hardly for beginners. Good stuff, but you’ll need some ‘Turkey in the Straw’ and the like if you’re a fiddler. Balance is good.”

“Well, classical music is for grand halls, where well-dressed people sit and appreciate you politely and quietly. Fiddlers play at parties and the people dance around, singing, stomping, and spilling beer at your feet.”

For the next half-hour, he let David discover the shop for himself, following the boy around, explaining the different instruments and their respective repair issues. A clarinet needing new cork, a drum with a torn skin, a French horn with a crushed bell. David examined everything with great care. He came to a violin in the corner, reached out to caress the stringless neck.

“That needs new tuning pegs. Oscar is too rough with it; I see that one every few months with a new problem.” He pulled a case from the shelf, set it on a clear space on the bench. “I have yours right here. Go ahead, open it.”

David grinned, flipped the clasps open and pulled up the lid, scrutinizing the instrument inside. It wasn’t new, but it was clean, and in perfect repair. He put his hand out, stopped and looked at the Maestro, asking permission with his eyes.

“Go ahead. Take it out. Let’s hear what you can do. Do you need a shoulder rest?”

“No, thank you. I was learning to play without one.”

“Better.” The Maestro took the bow out and tightened it. “Which of your songs are you going to play for me?”

“That would be … appropriate, I suppose.”

David put the violin on his shoulder, his chin in the rest, and began pulling the bow over the strings as the first notes of the hymn wafted out into the room. He closed his eyes, and the tune soon evolved into something more mournful, an unknown dirge, the melody the Maestro had been waiting to hear since he first played his own Maestro’s song on a bamboo recorder many long years ago. His anthem was not dissimilar, a weary wandering air finally finding its way home.

“Thank you, David. That was wonderful.”

David lowered the violin and the bow, handed them to the Maestro. “I’m sorry. It wasn’t ‘Amazing Grace.’ I’ve never heard it.”

“Neither had I, but I always knew I would one day.” He took the violin and bow, returned them to the case. “Let me show you what I need you to do around the shop. You can come here and practice after school and I’ll have some chores for you. You can learn the other instruments, too.”

“But I only know about the violin.”

“Soon, you will know them all, play them all.”

David went to the store every day after school, and the Maestro would leave him alone for an hour to practice after chores. When the Maestro returned, whatever song David was playing became the same sad song he had played the first day.

One day, David asked, “Maestro, what is this song? I only hear it when you are here, and I can’t play anything else.”

The Maestro took the violin and bow, laid them on the workbench. “That is my song. As long as I am near, it is the music you will hear. When I am gone, you won’t hear it anymore, but you will hear the songs of others, and play for them.”

David furrowed his brow. “What does that mean? I don’t understand.”

He sat on his workstool, hands on his knees, took a deep breath. “Everybody has their song. I’m sure your aunt has told you.”

“She told me that you write songs for everybody and play them when they come in.”

“That’s not quite right. I don’t write the songs. They are already there, in every person. I only interpret them. Think of an orchestra. There are many instruments—violins, trumpets, oboes, even a triangle. But everybody’s part is a little different. I hear all of those parts, and I share them with the people they belong to, but I do not write the songs.”

The Maestro bit his lip, shook and lowered his head. “No, I cannot. Yours is the one melody that I will never hear, and you will be the only one to hear mine.”

“Why? Can’t you play your song? I’m sure you can play it better than me.”

“No. I can only hear it when you play it for me, and soon you won’t be able to play it, either.”

David stood up and started pacing in the small workshop. “I don’t get it. You can hear everybody’s music, can’t you?”

“I have only heard the music of one Maestro: the one before me. More than fifty years ago I heard it and played it for him. He left and took it with him.”

“Into everything. To the other side. I don’t know what it is, exactly, but there everybody plays their part and the harmony is perfect. Here, when you hear the parts, it is chaos. You will have to stay inside much of the time; it will drive you mad at first, but you will learn to control it, to hear the separate parts. You will never hear the harmony, though. Not until you’re there.”

David pondered for a moment, then asked, “But my part? When can I hear that?”

“Years from now, when the next Maestro comes, and you’ll know that your time is near.”

The Maestro grew more tired every day, until one day David came to find him in his small room behind the workshop, lying on the bed, mouth open, staring at the ceiling.

“Maestro, are you unwell? Should I get the doctor?”

He waved his hand, let it fall to the side of the bed. “No need. It’s time. There is something that you can do, though.”

David kneeled by his Maestro’s side and returned his hand to the bed. “What is it, Maestro?”

The somber tune filled the old Maestro’s ears as he drifted away. It accompanied him to the other side, where his tune played in warmer notes on unfamiliar instruments. Snippets of melodies he hadn’t heard for years cut through the air: Father’s march, Mother’s hymn, arias and ballads of long passed friends and family. Clashing chords danced around each other, staccato and sustained, plaintive and joyful, riotous and somber. The harmonious cacophony rose as it fell, a joyous crescendo even as it diminished, swirling into the unison of a single, perfect note.

GEORGE WELLS is a regular contributor to Spark: A Creative Anthology, with short stories included in each of our volumes to date. His work has been published in Shadow Road Quarterly, and he currently fills the role of Writer Liaison for Spark.

Wells is an American expatriate living in Guadalajara, Mexico, where he teaches English as a Foreign Language and writes.